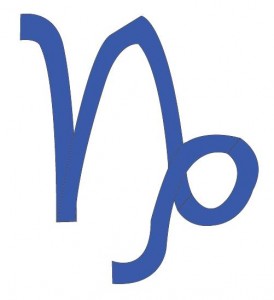 The constellation Capricorn has 3 rays influencing it. The only other constellation with 3 rays in it is Sagittarius. But, in Capricorn all those rays are very close to one another at least in their workings. Rays 1, 3 and 7 combined can and do point to a very practical existence, one in which there are clear goals in the material world, and a very determined personality that will strive to this goal.

The lack of any of the 2nd ray or any of its subsidiaries makes the Capricorns seem very cold, very efficient, very practical. They lack the warmth of relationship. Their interest is always into matter, how to make it work, how to gain more of it, and how to use matter, people or anything that is out there to their ends. The emotional side or the soft part of life is far from their understanding and one of the biggest obstacles they have to reaching their goals.

This makes socializing one of the hardest things for Capricorns to deal with, other people and their emotions are not clear to them, and therefore they become very shy at an early age, feeling secure when the rules are set, when there are clear boundaries and where formality supervenes. The 3rd ray is the ray of matter as we know it.

Saturn as the lord of karma is their ruler before and after they elevate their conciseness. The first Saturn makes them very hard, very closed in their own confines, believing in the current structures, the best in bureaucracy or any civic duty since they like its predictability so much. The 3rd ray has a tendency to separate, to preserve no matter what, to gain more, and be very calculated in dealings with other people. It is a cold Saturn that fends off any real feeling, and cares only about his goal, about being more or having more than anybody else around. In their eyes the phrase: “the end justifies the means”, is a true statement.

The Saturn that rules them after they open up and elevate the consciousness is the one that knows that the end is the sum total of the means, and therefore one should be very careful about how they get to their goal, and who is paying a price for them to get what they want. It is a far more relaxed Saturn, since he is able to let feelings, deep feelings be a part of life. He still couldn’t care less about emotions, or childish behavior in others, but when real depth of feeling is involved, the Capricorn is there with the best remedy or help. This is the 3rd ray that deals best with the material world, becoming efficient in every part of life. Those who so elevate their consciousness are the true initiates of the world: they are the ones who create the new structure for the children of tomorrow, and yet they remember to respect the old, or at least the parts that should be preserved and be the base for what comes next. The goals they envision are goals that include the welfare of humanity in them, and are not just small personal goal of a little person wanting to be in charge of other little people. It is a big person who wants to empower other big personalities.