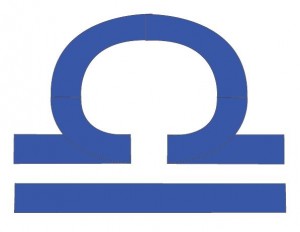 Libra has only one constellation energizing it, and it is that of the 3rd ray that of active intelligence. The active part of intelligence is very apparent in their manner. We all know Libra as the sign of relationship, the sign of love, and yet this sign is only ruled by the none-emotional rays. With this in mind we can understand that as much as Libras enjoy the company of other people, they still want to control those relationships through the mind, through rules, through objective observation. They  love to be around other people, love to debate, to talk, to learn.

When we combine the 3rd ray with the 5th ray for the average Libra we get the famous inability to decide, due to too much information that clouds clarity, we might get someone who believes himself to be far smarter or far more beautiful than he actually is, we get a huge emphasis on presenting an outer showiness of order and beauty, instead of just being who they are. When they feel empty they go on a shopping spree, when they are angry they fight with their sharp tongue. At the same time they mean well, they want to be in a harmonious relationship with the world, they want everybody to behave well and interact well with society, they would love to include everybody and have everybody live in the way they think is right. They firmly believe in being nice, and keeping good manners, so when the emotions get out of control they get lost in them.

Rules and laws are in their mind all the time, believing that there is one law and one rule for all, and they neglect to have the compassion for those who are unable to live and keep those standards. They are the best negotiators, and counselors with Venus as their ruler. They can see objectively how the opposing sides can reach a lasting agreement. This they do and so they develop the ability to marry the opposites into one functioning new unit.

The 3rd ray does know how to manipulate matter to show its beauty, and at the same time it is this energy which makes the Libras want to gain control over too many projects at the same time. Many of them conflicting with one another.

When their consciences elevates and Uranus with the 7th ray attribute starts to control them, they gain far more control over themselves, and are able then to assist other gain that desired good standard of living we all want. With Uranus they are able to understand both sides of the coin, but know how to balance them and find the real meeting place of the energies. From this fixed position they know the wise words, and the wise laws, and the right way to go to be in even more harmony with the world, and help others gain that view of the middle way. The real middle way is very quiet, yet very very active. In this place they are no longer scattered in two directions, but aim and get their goal.

2 thoughts on “Libra in esoteric astrology”